Imagine what it would have been like way back when, say the 1950s, when you were trying to get pregnant.

There were no home pregnancy tests, or even pregnancy tests at the doctor's office (that was circa 1960s), and, of course, the internet didn't exist (HUGE mainframes computers were starting to emerge). 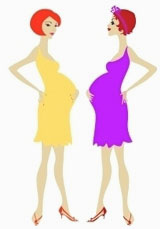 In the 1950s, only about 36% of women aged 25 to 44 worked (compared to 80% in 2010), so social media was primarily the neighborhood. And, back then, form fitting baby bump maternity outfits had yet to be invented (the term baby bump, too, was decades away!). On TV, such as I Love Lucy, bedrooms only showed twin beds (how that sperm got over to the egg was definitely a miracle of science - apparently, they were not only swimmers but high jumpers too), on-air kisses had time limits, and, when Lucy really was pregnant with little Ricky, censors would not allow her to say pregnant on air!

So we can imagine that talk of TTC (umm, what?), could I be?, is this an early pregnancy symptom? were hush-hush indeed. You couldn't pee-on-a-stick, upload it to an online gallery, consult with your internet friends to get opinions on whether you'd conceived. It probably went more like this...

Marge's out back hanging up laundry (dryers were exorbitant in the 1950s, and few and far between!) when her neighbor Doris emerges from the house in curlers and her laundry basket.

Doris: Oh, Marge, didn't see you over there under all those sheets. I have a favor to ask.

Marge: But of course, Doris, anything...

Doris: Do you have any extra clothes pins? William decided to patch the window last night with most of mine!

Marge: Oh that William. Your making me jealous. If only my George could be more like that...

Doris: So what's new over your way?

Marge: (Thinking, can she trust Doris...) Oh not much

Doris: Marge, I can hear something in your voice. Do tell. I insist!

Marge: Oh Doris, you know me so well. George and I are, ummmm... 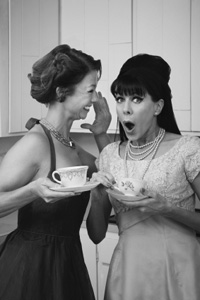 Marge: Trying for a little bundle of joy!

Doris: (Who by the way, already has a 1 year old baby girl, Barbara) That's marvelous. I just knew it, but didn't want to ask!!!

Marge: Well, here's my question. I think we may have succeeded! But how do I know if I BFP'd

Doris: BFP? Marge, what on earth are you talking about?

Doris: Marge are you calling me fat?

Marge: (Blushing) No, no, Doris, why you're the thinnest of all us girls! I meant a Big Fat Positive (Sidenote: Marge's husband George is in Research and Development over at the pharmaceutical plant, so she's au courant) 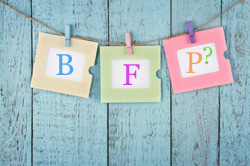 Marge: No, no, Doris... George's company is researching a way for women to be able to test for pregnancy at home! George says BFP on these tests would mean you were pregnant.

Doris: (laughing, but in a hushed voice, looking stealthily around) home...pregnancy...tests? That's RIDICULOUS. (Doris digs into her basket and a flask emerges. Swig, swig.) So what would it mean if you weren't pregnant on these so called home tests? LSN!

Marge: Now who's been drinking?

Marge: (Hears something, looks to her other side-yard) Uh, oh, there's nosy Gladys. Please, Doris, be a doll - nothing about this to her or any of the other girls. Let's catch up tomorrow morning. Coffee after the boys have left for work?

Doris: Absolutely, and just keep trying. My doctor told me, every single day, and now we have Barbie. You'll be big and fat soon darling, I'm positive :)

[Epilogue: Marge did in fact BFP, and Deborah was born 8 months later, in 1952. When Deborah and Charles were TTC in 1978, they were one of the first couples to use the new home pregnancy tests. Find out more about the history of HPTs!. When Deborah told her mom her HPT was a BFP, Marge couldn't wait to call Doris (still no internet)!]